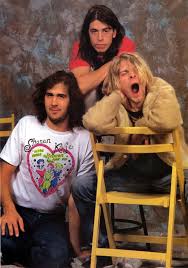 1991 was overflowing with new music and sounds, as well as more of a throwback to the 60’s and 70’s but mixed with new combinations. Fashion started to change yet again, bands were going for different sounds (but partly rooted in the past; perhaps reinterpreting the past is the main theme), and everything began to change a bit faster, as the world both became a smaller place and continued to grow by leaps and bounds. I think whatever was going through people’s minds at the time, they were actually striving for novelty. Just check out this tv talk show set:

I actually kinda like it. Probably for nostalgia’s sake; as a teenager in high school, tv had oddball backgrounds like this practically as a norm. Although I admit, this one is extra weird. ‘Nevermind’ is known as the album of the 90’s… but, time has given people more listens to other great albums of the past. And ‘Loveless’ is actually the higher rated album by rateyourmusic.com (which I think is one of the more reputable music sites, since similar to sputnikmusic.com it has hundreds (maybe even thousands of music reviewers, thus doing away with any kind of critic gatekeeping); it is one of my favorite albums as well.

I really was not familiar with this band at all in high school… but years later in college it really started to grow on me. The thing about My Bloody Valentine it that their albums keep getting better on each listen; a feat very few bands can accomplish. You can hear the layers, sound sculpting, and care given to the creation and production of this album. The production and arrangements are nuanced and layered. The melody always appears immediately, even though there are a trillion layers of distortion, layers of guitars including both electric and acoustic; buzzsaw bass guitar; ethereal keyboards and a multitude of effects. At times, their songs feel as if they are pulling and stretching you a million miles. The material was, however, pretty difficult (to say the least) to pull off live.

While I’d say this video is one of their better live performances from ’92, as far as I can tell by most youtube videos, they were pretty hit and miss live (keeping the vast array of sounds at balance in volume is an art in itself, as Kevin Shields has related in interviews; the blending of their sound and ways the instruments interlock are a bit like walking a tightrope). The reunion tour sounded pretty amazing though, from what I’ve heard… I lament missing that; especially since it is unclear if they will ever release new material or tour again, and that with newer PA systems and sound techniques they probably are making it sound much much better live. I wouldn’t bet on it… although it would be a shame if they never released any more new material, ‘Loveless’ would be a masterpiece of a swansong.

As far as what I was actually listening to at the time: Dinosaur Jr., while not one of my favorite bands, were a key band to knowing the feel of the early 90’s. One of my friends from my home town listened to all the cool kid music, and is one of the key people in influencing my choices in music listening (RIP Chad). In 1991 ‘Green Mind’ was released, one of Dino Jr’s best albums. The song that sticks out the most for me is “Water”:

The only music that could rival the alt rock movement of this time period was the continuing evolution of heavy metal. 1991 was pretty ridiculous for the metal realms: 4 of the best metal albums of the 90’s were released this year. Granted, 1990 was also quite metal; but ‘Arise’ by Sepultura, ‘Blind’ by Corrosion of Conformity, ‘Prove You Wrong’ by Prong, and the less pure metal of Mr. Bungle’s self titled major label debut make 1991 a very important turning point in the genre.

Again, new realms of sound are explored. Sepultura take death metal to new levels of creativity; C.O.C. changed their sound to one of the heaviest thrash albums ever (the only album with that vocalist, and the stopgap between their hardcore punk sound and their heavy southern rock sound); Prong’s most unique sounding album and one of the more original sounding and envelope pushing heavy music releases; and Mr. Bungle, while hardly metal per se, reinvented the sound with very advanced and strange musical performance abilities. So to end this posting, check out this youtube metal extravaganza I’ve collected:

the psychotic sounding “Painted Smiling Face” by Corrosion of Conformity:

And last but not least a live performance circa 1991 by the late, the great, Mr. Bungle: